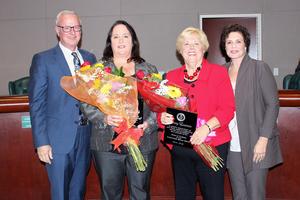 The District recently honored Mrs. Mary Mangold and Mrs. Penny Loomer, two distinguished Board Members that are retiring from service after many years of outstanding governance. They both leave legacy’s to be proud of and are leaving the district a better place than when they started.

Trustee Mary Mangold was installed in 2006. In her 12 years of service, Mary was elected Board President by her fellow trustees an unprecedented six times.  The amount of achievements the District has made under her leadership is exceedingly long but here are some noteworthy highlights.

In January of 2014, Mrs. Penny Loomer was appointed to the Board and was then elected to the Board the following November.  In her five years on the Board, Mrs. Loomer was elected Board President by her fellow Trustees twice.  Together, she and Mrs. Mangold (along with their fellow trustees) provided the leadership for the following remarkable achievements:

Thank you to Trustee Mangold and Trustee Loomer for the extraordinary leadership and service they have both provided in governing the Westminster School District.