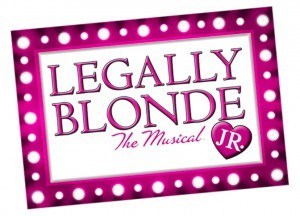 Johnson Middle School Theatre Arts students will have Westminster thinking pink when they present their production of Legally Blonde Jr. on June 1 and June 3, announced Daniel Owens, Principal of Johnson and an advocate for the Arts. “Legally Blonde Jr. may be a comedic, light-hearted show, but it also explores serious themes of self-discovery and independence which resonates with people of all ages,” says Owens.  “We hope everyone in Westminster is totally psyched to see the show.”
The fun and upbeat musical follows the adventures of a sorority girl named Elle Woods – a Gemini with a double Capricorn moon – who tries to win her ex-boyfriend back by earning a Harvard law degree.

Delta Nu sorority president Elle Woods seems to have it all: good looks, a relationship with the “campus catch,” and great taste in clothes. However her life is turned upside-down when her boyfriend, Warner, dumps her in an attempt to start getting “serious” about his future and attend Harvard Law. Determined to win him back, Elle uses a lot of hard work and some charm to get into Harvard Law so she can prove to Warner that she’s serious enough for him. Once at school, she is challenged by her peers, professors and her ex, but with the help of some new friends, Elle realizes her potential and sets out to prove herself to the world.

Legally Blonde Jr. is based on a major motion picture starring Reese Witherspoon, which was nominated for a Golden Globe Award for Best Motion Picture: Musical or Comedy.  Legally Blonde will showcase talented singers and actors such as Alexa Perez as Elle, and Perla Nieto as Vivianne.

Johnson Middle School Theatre Arts in Westminster will present Legally Blonde Jr. on June 1 and June 3 at 6:30 PM on their brand new stage at 13603 Edwards Avenue. Tickets are $5.00 and may be purchased at the door or in the front office. For more information please email the director, Colleen Dudas, at cdudas@wsdk8.us . There is no dress code, but please don’t wear white after Labor Day.
Print