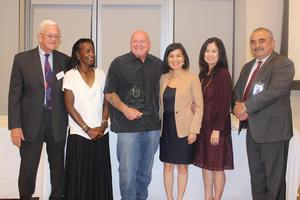 Ralf Correll, a skilled maintenance worker, is celebrating a remarkable 40 years with the Westminster School District this year! He was honored recently at the annual WSD Retirement & Years of Service banquet for this extraordinary accomplishment. Did you know that the average tenure at a job in the United States is 4 years? Ralf has exceeded the national average 10 times! That is truly exceptional! Employees that have reached this kind of longevity are an extremely valuable resource and we deeply appreciate Ralf’s wisdom, knowledge, and contributions.

Ralf began his journey in Westminster as a 5th grade student at Anderson Elementary shortly after moving to the United States from Germany. He attended Warner Middle School and then Westminster High School. After high school, Ralf was hired by Westminster School District and has been here ever since.

Ralf’s co-workers and friends describe him as “meticulous.” They say that his truck is like a mobile hardware store and his tools are always perfect. His breadth of knowledge regarding the District is amazing as well and he acts as historian.

Ralf is always looking for ways to help students and staff. In fact, years ago when he saw that students’ backpacks were getting kicked around and damaged on the ground, he outfitted every school with backpack hangers. He was ahead of his time, as this is now standard operating procedure everywhere.  Ralf has always demonstrated a great work ethic, integrity, and honesty. His abilities far exceed his job description, which makes him an invaluable employee.

When Ralf is not at work, he enjoys music, football, and riding his Harley Davidson motorcycle, which is also described as meticulous. Ralf enjoys spending time with his two boys and his wife, who was also his high school sweetheart.